Back to all posts

No Music News except... Remember the New Record is out and Available to purchase at www.JTmusic.com. Order your copy today. :-) 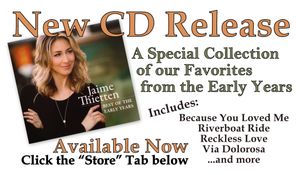 Special Lenten Message, From the Heart
I love the Lenten season. Until, I became Catholic, I never really paid attention to Lent and what it’s all about. Now, each year, I look forward to growing a little deeper in my understanding and practice of what it means to truly make sacrifices in my life.

Jesus spent 40 days fasting in the desert before entering into His public ministry (Mt 4:1-11). We imitate Christ by spending 40 days in spiritual discipline before the celebration of Christ’s triumph over sin and death (Easter). You’ve maybe heard the question “So, what did you give up for Lent?”.

I remember my 1st year as a Catholic very well. I decided to give up coffee for Lent. I’m not a coffee drinker now, but I used to be totally addicted to the iced mocha’s from Moxie Java in Idaho. The best! And when I say I was addicted, I mean “I WAS ADDICTED”.  So I decided for Lent that I was going to give up my Mocha’s.

I know this sounds trivial but stay with me on this. Every day, on my way to work, I would drive by Moxie Java and crave that Mocha so bad. I could almost taste it. Several times I actually turned in to the parking lot, a rush of guilt would poor over me, and then I would drive right back out again. Phew!  I’d remembered the promise that I had made to myself, to sacrifice something that would make me think of Lent and why I was making this sacrifice. For the next few weeks, as I drove by that coffee shop, I would really imagine Jesus walking the road to be crucified, suffering on the cross, and sacrificing everything for me. Suddenly a peace would come over me and the craving for the coffee would go away. But was I really sacrificing? I mean Jesus gave up his life, and here I was giving up coffee? No contest! But the whole point of this is that I needed to choose something that would remind me, on a daily basis, what Jesus did for me, and the coffee is what did it that year.

I like to think that I’ve grown in my journey a little since that Lent (2007). And my sacrifices have become a little more meaningful each year. This year I chose to limit TV. The reason why is because I use television to escape reality. It’s the only way that I’ve found, to turn my brain off from work. Otherwise I’d work 24/7. Just ask my husband, Pete, who has to look over and say “seriously” as I pick up my laptop off the floor (next to my bed) at 11:30pm to jot down one more thing I have to do tomorrow.

So this year, I committed to not only turning off the TV, but I committed to start reading books (at least 1 per week during lent). For those of you who know me well, I am NOT a reader. WHAT? JAIME READ A BOOK, FOR FUN? NOOOOOOOO! I will read if I have to, but it’s certainly not something I choose to do for fun. To me it is work. Pete is a reader and I figure since he reads like 2 books a week, that he’s got that covered for the both of us. Too bad it doesn’t work that way.

I am happy to report that the TV has remained in the off position for most of the week and that I have been picking up Spiritual books instead. Jaime is growing. It’s never too late.
Whether you are Catholic or not, this whole giving up something or sacrificing something during Lent is a very good habit to get into. And remember, if what you give up, doesn’t hurt a little each day, then it’s not really a sacrifice.
I love how Pope Francis ended one of his homilies about Lent and I will end this message with his thoughts.
"During Lent, let us try to draw closer to the people who are going through difficult times:
close to them with affection, prayer and solidarity."
It’s not just about us. But it’s about how we can sacrifice and empty ourselves of selfishness, greed, jealousy, hatred and worldliness making room for Christ and His love; His love for us and for those around us. 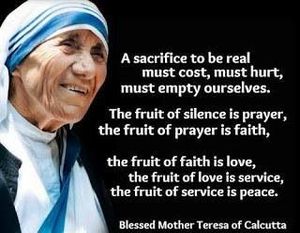 May you be blessed this Lenten and Easter Season. Thank you for your continued prayers and support.